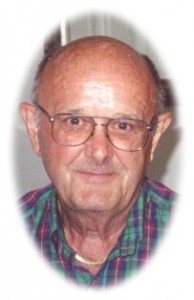 He was born April 25, 1931 in Port Washington, Wisconsin to Nicholas J. and Caroline Schmit Walsh. He grew up on his uncle’s farm and when he finished school he served in the United States Air Force during Korea. He married Evelyn L. Grasse of Cedarburg, Wisconsin on February 21, 1953 at St. Francis Borgia Catholic Church in Cedarburg. Together they raised their family on Nelson Drive in Port Washington.

Upon his return home from the service he started working for the former Wisconsin Bell Telephone Co. in Milwaukee. He started out as a lineman and over the course of 35 years became a foreman at the former downtown offices. He retired in 1989 and moved to Germantown with his wife Evelyn.

Arlin was a longtime member of St. Mary and St. Peter parishes in Port Washington and a long standing member of the Van Ells-Schanen American Legion Post 82, Port Washington. He really enjoyed retirement; wintering in Naples, Florida, traveling the country with his wife on their Honda Goldwing with friends, golfing and fishing. He was a family man who was always there to support and help the kids with their home projects.

He is survived by his wife Evelyn of Germantown and children Mike (Teri) Walsh of Lisbon, Wisconsin and Michelle (Lisa Rudnick) Walsh of Onalaska, Wisconsin. Further survived by grandchildren Anika and Caitlin Stewart, Kristin (Peter) Holmgren and Dane Walsh, his sister J. Carol Kartheiser of Port Washington, sister-in-law Margaret “Marge” Grasse of Menomonee Falls, son-in-law Robert Stewart of Middleton, Wisconsin, other relatives and friends. He is preceded in death by his daughter Kathleen Walsh and a brother-in-law Clarence Grasse.