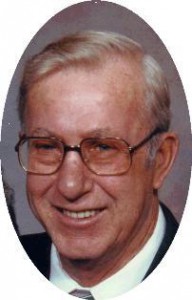 He was born on January 24, 1927 in the Town of Ettrick, Wisconsin.  He was the son of Oscar and Emila (Buxrude) Stenberg.  He always talked of his leaving the family farm at age 13 and working throughout the state as a farm laborer, ending up in Milwaukee.

At the end of World War Two he entered the United States Army, achieving the rank of Staff Sergeant.  He was discharged after the Korean War, during which time he received the Purple Heart.

During this time he married Doris Meisel of Milwaukee on September 9, 1952 in Waukegan, IL.  He started working construction and became a crane operator.  His wife Doris preceded him in death on January 10, 1968.  He continued to do construction and carpentry work.  On June 19, 1968 he married Mae B. Mullikin of Wauzeka, WI  in Waukegan, IL.  Throughout their years together they resided in Milwaukee, Menomonee Falls and Saukville, amongst others.  While living in Saukville, he was a partner in the Inland Construction Company.  They later moved to Elkhart Lake where he operated a small farm.  His wife Mae preceded him in death on July 16, 1995.  For the last ten years he had resided in Random Lake.

Leonard has been a member of the International Association of Operating Engineers Local 139, Milwaukee for over 50 years and the American Legion Post 17, Arcadia, WI almost 60 years.