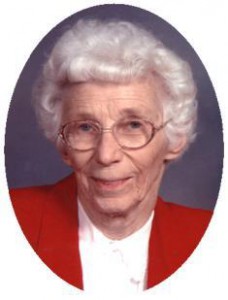 Ione Barbara Schwenker (nee Vande Boom), a member of the Greatest Generation, passed away on July 25, 2011 at the age of 91.  A dedicated daughter, she was with her father when he passed, and her mother lived with her during her twilight years.  She was actively involved in the lives of her nieces, nephews and cousins and regularly visited the sick and elderly.

Ione married Phillip “Jim” Schwenker in 1954 and remained in love with him 40 years past his untimely death in 1970.  After his passing, she worked for 15 years in the headquarters office at Bolens Corporation.  Born in 1920 and growing up in the Great Depression, imparted a strong work ethic, frugality and a sense of social fairness that was a true definition of “compassionate conservatism”.  She was active in the Christian Mothers Society, National Catholic Foresters and St. Mary’s Parish.  She enjoyed an active social life with “the girls” going to shows and discussing the news of the day.

She was the anchor in life for her son Joe and provided quiet comfort and strength to him especially after the death of his daughter Erin.  Trusted and beloved mom of daughter-in-law Cyndi.  Grandson Logan became the light of her life as she became “Nanny” while in her 70s.  She logged numerous miles behind a stroller and could light up his face like no other.  The addition of granddaughter Kylie filled her with special joy during her later years.  Her gentle goodness was recognized by the innocents, children and animals were drawn to her.  The term “saint” is a lofty adjective but proves an apt description for Ione.

Drawing on her farming roots, she found joy in nature – a Harvest Moon, the smell of new mown hay, fresh picked strawberries, the lazy loop of a passing butterfly, the whistle of a cardinal and a crisp fall day.  She had a green thumb in her plants lived for decades.  An outstanding cook and baker, her cozy house was filled with the aroma of true comfort food, absolutely made from scratch – soups, roasts, cookies, muffins and the like.