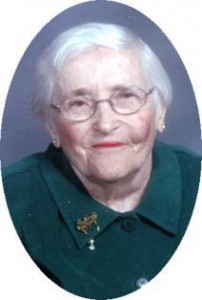 Through the years Elsie lived on N Milwaukee Street in Port Washington and moved to the Maple Crest apartments in Port Washington  in 1997.  She worked as a nurses aide for the former St. Alphonsus Hospital in Port Washingtion until her retirement in 1990 at the age of 73.  She enjoyed playing piano and crocheting.