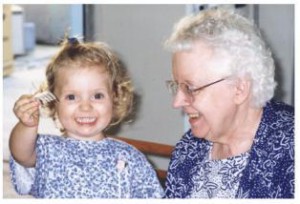 After her marriage Marge attended the Wisconsin Institute of Mortuary Science in Milwaukee and became a Wisconsin licensed funeral director in 1948.  Together with her husband, she worked as a funeral director and bookkeeper for the Poole Funeral Home and Lakeside Movers, which was founded by her husband.  Marge was a mother, caregiver, homemaker, friend and compassionate listener.  She provided great care to past family members.  Her home was open to all.  Her husband Erin preceded her in death July 5, 1993.

In 1998 she was recognized by the Wisconsin Funeral Directors Association for 50 years of service to families and her community, continuing the commitment of her husband Erin and his parents W. D. and Mayme Poole to funeral service.  She was a Girl Scout Leader when her daughters were young, a member of the Port Washington Woman’s Club, charter member and guide of the Judge Eghart House, charter member of the Port Washington Historical Society, Ozaukee Historical Society, St. Mary’s Christian Women, Catholic Order of Foresters, Wisconsin Funeral Directors Association, National Funeral Directors Association and National Selected Morticians. Over the years she enjoyed ceramics, collecting angels and tending to her African Violets.  She was a voracious reader, sharing bags of books with family and friends.  Quiet in her own right, she enjoyed time spent with family and friends.  She could be found sharing an afternoon lunch, a game of bridge or chat on the telephone.