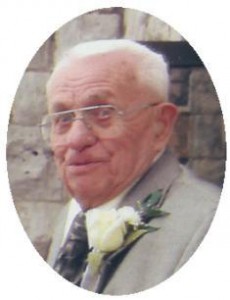 Clarence N. Peiffer, 97, of 132 E. Whitefish Rd., Port Washington died peacefully on February 12, 2007  at Virginia Highlands Health and Rehabilitation Center in Germantown where he had been a resident a few weeks.

He was born in Holy Cross, Town of Belgium, Wisconsin on July 12, 1909 to John and Rose Wester Peiffer.  On August 4, 1934 he married Marcella A. Remich of Lake Church at St. Mary’s Catholic Church in Lake Church.  She preceded him in death on February 11, 1958.  On April 23, 1969 he married Esther E. Robel Wilde of the Town of Mequon at St. Peter of Alcantara Catholic Church in Port Washington.  She also preceded him in death on March 6, 1994.

Automobiles were always a big part of Clarence’s life.  On July 1, 1952 he opened Peiffer Auto Service on North Wisconsin Street in Port Washington and up until a few months ago was there most every day.  From 1958 to 1975 he also operated an American Motors Dealership there, as well as, lawn mowers and snowblowers from Simplicity Mfg. and Toro.  In his later years he could always be found greeting a friend by the parts counter.  He continued to help out around the garage long into his golden years. Peiffer Auto Service continues to be operated by his two sons, Don and David.

He was and usher for St. Peter’s Church for many years; was very fond of his cars and enjoyed a drive now and then.  Most of all he enjoyed the Sunday polka dances at Kewauskum, Adell and Johnsonville.  He enjoyed bowling, shot pool at the Port Washington Senior Center and still played sheepshead twice a week with his friends.  He was a member of the Catholic Order of Foresters, Loyal Order of Moose #1043 Saukville, Catholic Knights Branch 31 and Knights of Columbus Ozaukee Council 2035.

He is survived by his sons Don (Carol) and David (Diane) Peiffer and step-son Gerald Wilde, all of Port Washington, 6 grandchildren, 15 great-grandchildren, 2 great-great grandchildren, sisters Sally Layman of Milwaukee, Hildegard Bremser of Cedarburg and Evelyn (Alex) Goedde and his brother Al Peiffer, both of Port Washington, nieces, nephews, other relatives and friends.  He is preceded in death by his two wives and five brothers, Roman, Harry, Norbert, Ervin and Milton Peiffer.

Funeral services will be at 1PM Sat. Feb. 17 from the Poole Funeral Home, Port Washington to St. Peter of Alcantara Catholic Church, Port Washington for Mass at 1:30PM.  Reverend Patrick Wendt will be the celebrant.  Interment will take place in the St. Mary’s Cemetery, Port Washington.  Visitation will be held from 10AM-1PM Sat. at the funeral home with a Knights of Columbus vigil at Noon.