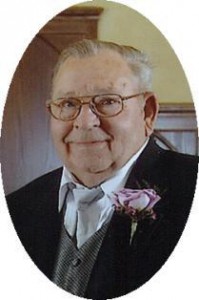 He was born April 5, 1935 in the Town of Saukville to Loyal and Irene Zuelsdorf Paape.  Raised on the family farm he graduated from Port Washington High School in 1953, playing football and baseball.  He worked as a mechanic for the Columbia Garage in Port Washington and also at Ray Dahm’s Service in Grafton.  He entered the United States Army in 1955  serving as a Tank Mechanic until his discharge in 1957.  While on leave he married Mary Beth Bostwick of Port Washington on May 12, 1956.  When he returned he resumed work at the Columbia Garage. In 1965 he started working for Freeman Chemical in Saukville as a semi mechanic.  After many years and a name change to Cook Composites he retired in 2000.  His wife Mary Beth preceded him in death November 8, 2008

Jim volunteered for the Saukville Fire Department for 34 years from 1967 to 2001 and also volunteered for the ambulance until 1997.  In 1985 he was honored with the Chief’s Award as the firefighter of the year for his service as a chief engineer.  In his younger years he played baseball for various local teams and was a 4-H leader in small engines and softball.  He was also willing to help out and in addition to his job helped his brother Earl with his milk route and many farmers when they needed help.  He enjoyed his garden and meeting up with friends around town and at the truck stop.  He also enjoyed bus trips to the casinos.  He will be missed by many for his eagerness to help or share a smile and friendly greeting.