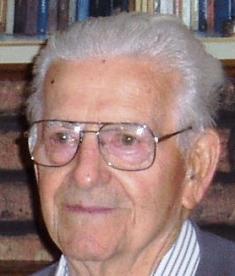 A U.S. Navy World War II veteran, Phil traveled around the world, served aboard the USS New Mexico in the South Pacific and fought in many campaigns, including the Philippine and Aleutian Islands, and Okinawa. Phil was a recipient of the Purple Heart.

Following military service, Phil was employed by Great Lakes Coal Co. as a crane    operator, unloading coal boats from high atop the Port Washington, WI coal bridge. He also worked for Gaylord Container in Milwaukee and the Grafton School District from which he retired in 1991.

Prior to his enlisting in the U.S. Navy, Phil met Bette Schmit, and they later married on November 26, 1949 at St. Joseph’s Rectory in Grafton, WI. Phil was a long time parish member and a member of American Legion Rose-Harms Post 355.

Our grandpa was not only a wonderful man, but our hero and best friend. He was generous with his time, always helping with homework and teaching us all he knew about life. He will be missed greatly. Grandpa, we love you to the moon and back.

We love you and miss you, Pa.