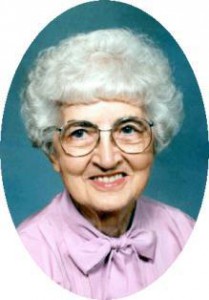 She was born August 6, 1917 in Waldo Wisconsin to Henry and Mabel Dell Soerens.  She married Frank Novshek of Port Washington on November 9, 1945 at First Reformed Church in Oostburg, Wisconsin.  They made their home on W Jackson Street in Port Washington.  She worked as a sales clerk for the former Lueptows Furniture in Port  Washington and at the former Klein’s Haberdashery on Franklin Street.    She was a former Girl Scout Leader for the Manitou Girl Scout council.  Jerry had a love of music and was the organist at First Congregational Church in Port Washington for over 50 years and also taught piano and music in her home.