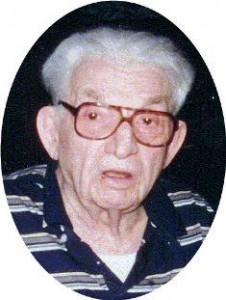 Emil “Mac” Newhouse, 89, formerly of W Walters Street in Port Washington, died March 26, 2004 at Heritage Nursing and Rehabilitation Center in Port Washington were he had been a resident for the last eight years..

Emil was born March 8, 1915 in Brandon, Manitoba, Canada to George and Pauline Liest Newhouse.  St. Sebastian’s Church in Bessmer, Michigan was where he married Sophie C. Pujnich of Bessmer, Michigan on April 15, 1944.  He was the custodian for the mother house of Sisters of Sorrowful Mother in Milwaukee.  In 1940 they moved to Port when St. Alphonsus Hospital was built  and he was the custodian for the hospital almost 40 years while Sophie worked in the medical records department.  They lived across the street from the hospital and were very dedicated spending much of their free time at the hospital.  Together they were members of St. Mary’s Catholic Church where Mac was an usher for many years.  They also enjoyed traveling back to Canada to see family.  Sophie preceded him in death May 21, 1994.

He is survived by a brother, George (Audrey) Newhouse of Milwaukee, sisters Margaret Dunbar and Emma McDonald both of Canada, nieces, nephews, other relatives and friends.  His wife Sophie and two brothers Frank Newhouse and John Newhouse precede him.