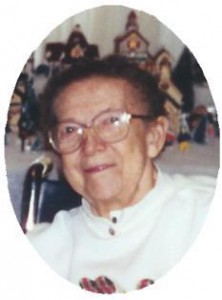 She was born in Port Washington, Wisconsin on May 23, 1920 to Frank and Catherine Swatek Hansen, Sr.  She met Alvin Mielke, Sr. of Campbellsport, Wisconsin and they were married March 24, 1942 in Tacoma, Washington.  He preceded her in death March 15, 1966.  Elrita was a homemaker, but also worked at Krier Preserving in Belgium, Portal Industries in Grafton and made cavier for Smith Bros. Restaurant in Port Washington through the years.  She enjoyed crocheting and sewing along with cake decorating and gardening.  In 2001 she moved from Port Washington to Sheboygan Falls with her caregivers Tim and Wendy Wells.