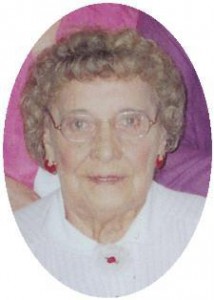 While her husband was employed at the Kohler Company they resided in Sheboygan Falls and attended the current Blessed Trinity Parish.  In 1958 they moved to Saukville where she worked at the former Northern Signal Company and cleaned for the Port Hotel in Port Washington.

In 2003 she had moved to Lincoln Village in Port Washington and for the last year she resided at the Woodland View Estates in Fredonia.  She will be remembered as a hard working, yet quiet lady.  She was a member of the Catholic Order of Foresters.

She is survived by her two daughters, Jean (Thomas) Bronson of Glendale and Darlene (Roman) Uhlig of Fredonia, 5 grandchildren, 10 great-grandchildren, two brothers Sigmund (Bernice) Chikowski of Sheboygan Falls and Donald Chikowski of Berlin, WI; nieces, nephews, other relatives and friends.  She is preceded by her husband Harry and two brothers, Edmund and Raymond Chikowski.

Her funeral mass will be celebrated at 10AM Tuesday, November 14 at Immaculate Conception Church, 145 Church Street, Saukville.  The Reverend Karl Acker will be the celebrant.  Interment will take place in St. Mary�s Cemetery, Sheboygan Falls.  Visitation will be from 4-7PM Monday November 13 at the Poole Funeral Home, 203 N. Wisconsin St., Port Washington and AT CHURCH Tuesday from 9-10 AM.  A rosary service will take place at 4PM Monday at the funeral home