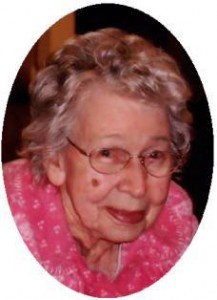 For over 33 years, Esther was a machine operator at Tecumseh/Power Products in Grafton.  She retired in 1978.  She had traveled extensively throughout Norway, Denmark and Sweden, taking in the sights and their family heritage.  Before Alaska was a state, she and her husband drove the rustic roads of the day.  She covered most of the continental United States while keeping a ledger of her travels, as well as, her daily life.

She was a lifetime member of the Ladies Auxiliary Flag Day Memorial VFW Post 7037 and St. John�s Lutheran Church of Fredonia.  Esther enjoyed crocheting and reading.