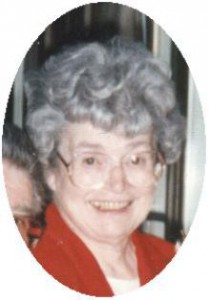 She was born on March 19, 1925, daughter of Frederick and Myrtle D. Fogarty Peters in Brookline, MA.  On May 6, 1945, she married Ambrose P. Mayer of Port Washington in Brighton, MA, while he was in the military.  Later in 1946, she and her new husband moved to Port Washington.  Together they started a family, residing on the city’s westside.

With her husband working at the power plant and active in city politics, Ruth followed the traditional things.  She will be remembered as a seamstress and cook/baker.  She knitted or crocheted many wonderful items.  Ruth was a homemaker by trade, but a wife and mother at heart.

Like her husband, Ruth loved Port Washington’s history.  Since its inception, Ruth has been an active guide and board member of the WJ Niederkorn Museum and Art Center/Judge Eghart House, now over forty years.  Years ago she taught CCD at St. Mary’s Parish.  She was a Cub Scout and Girl Scout leader when her children were young.  A dire Cubs fan, she was unable to see her team go the distance.  She took great pride in her Celtic heritage.  Ambrose preceded her in death on July 4, 2000.

She is survived by her children, Bonnie Mayer of West Allis, Dennis (Linda) Mayer of West Bend, Jim (Lorraine) Mayer of Kenosha and Jeanne Mayer of Port Washington.  She is further survived by six grandchildren, seven great-grandchildren, her sister Barbara (John) Arancio of Dedham, MA, her brother Gary (Kathy) Peters of North Weymouth, MA, sisters-in-law Angela (Al) Kultgen of Port Washington and Ruth (the late David) Mayer of Delaware, nieces, nephews, other relatives and friends.  She is preceded in death by her husband Ambrose, her sister Ellie Digiovanna and grandson Josh Mayer.

Mass of Christian Burial will be celebrated at 1PM Saturday, December 1, 2012 at St. Mary Catholic Church, 430 N. Johnson Street, Port Washington.  Reverend Tom Lijewski will be the celebrant.  Visitation will be from 11AM to 1PM Saturday AT CHURCH with an 11AM rosary.  Interment at St. Mary’s Catholic Cemetery in Port Washington.  Memorials to Wisconsin Humane Society Ozaukee Campus, 630 W Dekora Street, Saukville, WI 53080 are appreciated.