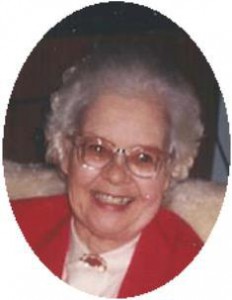 She was born July 31, 1916 in Lake Church, Town of Belgium, Wisconsin to Peter and Anna Tholl Ternes.  She was the youngest of seven children and known to many as Baby Anne.  She worked at the Lighthouse Restaurant on East Grand Avenue in Port Washington.  There she met Thomas Marcus.  They were married October 23, 1937 at St. Mary’s Catholic Church in Port Washington.  Shortly after they were married they moved to to Milwaukee.  In 1952 they returned to Port Washington.  Anne loved to walk and travel.  Together with her husband she traveled throughout the United States and Canada.  They also enjoyed time at their “home in the woods” in Friendship, Wisconsin.  Her husband preceded her in death April 10, 2000.

Anne was a homemaker who made the most delicious cookies that were always a hit with family, neighbors and at bake sales.  During World War Two her brothers-in-law eagerly anticipated packages of cookies from her that were crumbs by the they received them.  She played the piano and danced, winning dance competitions held at the Port Washington Roob Theather.  When her daughters were younger she was a Brownie Scout Leader.  Anne was an avid reader and was always busy knitting mittens and scarves for her grandchildren and making quilts or latch hooking rugs.

Her family was her life and Anne loved her children, grandchildren and great grandchildren.  She was always willing to lend a hand and enjoyed spending time with her grandchildren.  Anne had the most beautiful smile and loving way about her, a sweet and delightful soul.  She was a very special mother and friend and will be missed.

Fr. Guy Gurath will celebrate Mass of Christian Burial at 11:30 am Saturday, February 18, 2006 at Holy Trinity Catholic Church in Newburg.  Interment at St. Mary’s Cemetery, Port Washington.    Family will receive friends from 9:30 – 11 am Saturday at the funeral home.  Memorials appreciated.