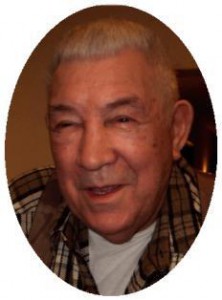 He was born on October 8, 1933, son of Mathias and Celia Gross Kultgen in Port Washington.  His father died when he was four years old.  His mother later married Edwin Brager.

On December 22, 1954, Bob married Rosemary Rick of Milwaukee in Grafton.  After a time living in Grafton, the family moved to North Montgomery Street in Port Washington.  Rosie preceded him in death on September 15, 1999.

For over 40 years, Bob worked at Ataco Steel in Grafton.  He started as a truck driver and later a tool and die maker.  His time clock card was stamped employee 1.  He retired in 2000.  He was a longtime member of the International Association of Machinists and Aerospace Workers District 10.

Bob loved going for a drive for whatever the reason.  He enjoyed going up north and riding his ATV with the family.  He liked hitting the casinos and flea markets.

He is survived by his sons John (Carol) Kultgen of Saukville and Kurt Kultgen of Port Washington; four grandchildren Lisa Shepherd of Madison, Jody Kultgen of Little Chute, Robby (Annette) Kultgen of West Bend and Ryan (Rebekah) Kultgen of Grafton; 4 great-grandchildren RJ, Mya, Chloe and Jasmine, other relatives and friends. He is preceded in death by his wife Rosie, son Robert Kultgen Jr., his sister Bernice Gasser-Burmesch and his brothers Edward Kultgen and Donald Brager.

The family would like to extend special thanks to Ellen’s Home, Horizon Hospice, Tim, Laura and staff of Home Helpers and Aurora Medical Center and staff for all their compassionate care.