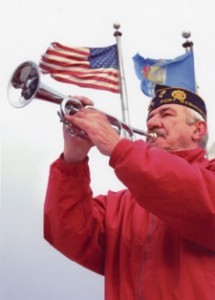 Ronald E. Knop, 63, of E Monroe Street, Port Washington died at his home after a battle with cancer.

Ron kept busy with several organizations.  He was a member of St. Peter of Alcantara Catholic Church and was a member of its  Building and Grounds Committee along with being a Past President St. Peter’s Men’s Club, Past Secretary St. Peter’s Mens Club for 12 years and past President St. Peter’s Usher Society.  He was Past Commander of Van Ells – Schanen American Legion Post 82, Life member of the Past Commanders Club of Wisconsin and Adjutant for Legion Post 82 for 32 years.  In addition to the American Legion, Ron was also a Life member of Ozaukee Memorial Post 5373 Veterans of Foreign Wars, Voiture #1330 40/8 and “Bugles Across America”, a group of volunteer buglars for military funerals.  He played “Taps” for many funerals and military events.

He enjoyed family and friends, hunting, fishing, watching the Packers and Badgers, NASCAR, cutting wood, playing cribbage and sheepshead, golfing and bowling.  He was a member of the John Lake Association, the Lincoln County Sportsmans Club and a faithful member of the “Devil’s Pocket” of Merrill, Wisconsin.