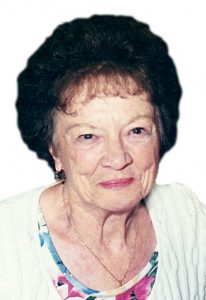 She was born on February 8, 1924 in Port Washington; daughter of John P. “JP” and Flora Meyer Husting. She attended St. Mary’s parochial school and worked as an aide at the former St. Alphonsus Hospital. On June 7, 1947, Florence married Walter E. “Ozzie” Jaeger of Thiensville at St. Mary’s in Port Washington.

For many years, she and Ozzie lived in Grafton raising their family. They were members of St. Joseph parish for many years. Ozzie preceded her in death on January 4, 1991. A few years later, Florence moved to Port Washington. Later in life she enjoyed her travels with family. She will be remembered for her smile and sense of family. She tended to her bird feeders daily, often sharing the views with others.

She is preceded in death by her husband Ozzie, her sisters Mary Basken and Esther Husting, her brothers Harold and Oliver “Ollie” Husting and her granddaughter Rhonda Butzke.