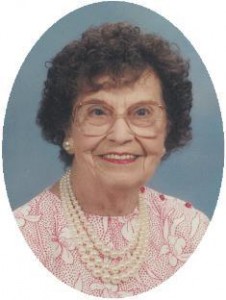 She was born February 21, 1909 to Dominic and Barbara Roob Thill in Port Washington.  When she was three the family moved to a farm in Saukville, currently the site of Wal-Mart.  She met Norman J. Hoeft of Saukville and they were married October 14, 1933 at Immaculate Conception Church in Saukville.

Through the years Edna worked as a clerk at the West Bend Woolen Mills and the former Grady IGA Store in Saukville.  She was a homemaker who enjoyed tending to her flower garden, crocheting, sewing and baking cookies for her grandchildren.  She was active in the Royal Neighbors Camp 8373, Saukville and was an election poll volunteer at Thomas Jefferson Middle School in Port Washington.  She also enjoyed playing cards and golf and was a volunteer at the Port Washington Senior Center.  Her husband Norman preceded her in death January 17, 1989

Mass of Christian Burial will be celebrated by Reverend Pat Wendt at 2 pm Saturday, March 19, 2005 at St. Peter of Alcantara Catholic Church.  Entombment parish cemetery.   Visitation will be from Noon to 1:45 pm at church (1800 N Wisconsin Street, Port Washington).   Memorials to St. Peter’s or charity of choice appreciated.