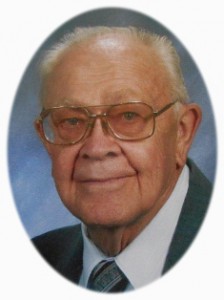 Gilbert H. Henke, age 94, formerly of Park Ridge Ave. in Appleton, WI died Thursday, October 23, 2014 at Applewood Assisted Living in Brookfield, WI where he has resided the past fourteen months.

Gilbert was born on October 19, 1920; son of August H. and Elizabeth M. (Goerl) Henke in Briarton, WI. He was received into Christ’s Kingdom of Grace through Holy Baptism on November 10, 1920 and after being instructed in the truths of God’s Word, he was confirmed on May 13, 1934. After graduating from Appleton West High School, he began work as a carpenter. From 1942 to 1945, Gilbert served in the United States Army overseas during World War II. As a Private First Class, he served as a Medical Aidman, providing first aid to his fellow comrades in Normandy, Northern France, Rhineland, Ardennes and Central Europe.

On August 9, 1947, Gilbert married Arlene L. Palmbach of Greenville, WI at Immanuel Ev. Lutheran Church in Greenville, WI. Together they settled in Appleton where made their home for many years.

Over the years, Gilbert built many homes in and around the Appleton area. He worked for several home builders in the area including; P. Noffke, Lawrence Radloff and Fred Hoeppner, amongst others. Gilbert enjoyed being a carpenter and became a skilled tradesman that could provide and complete most phases of home construction. When not on the job site, he enjoyed gardening and woodworking.

He will be remembered as a family man and a man of faith. He and his wife had been very active with their church, with Gilbert serving as the assistant financial secretary for many years. In 2013, Gilbert and Arlene moved to Brookfield to be closer to their son, Steven and his family. He has been a member of the Oney Johston-Edward Blessman American Legion, Post 38 in Appleton over 65 years.

Gilbert is survived by his wife Arlene of Brookfield, his son Steven (Julie) Henke of New Berlin, his grandchildren Elizabeth Henke of Pooler, GA and David Henke of New Berlin; his brother Harley (Dorothy) Henke of Appleton, brothers-in-law Gerald (Donna) Palmbach and Clifford Broehm, both of Appleton, nieces, nephews, other relatives and friends. He is preceded in death by his brother-in-law Earl Palmbach and sister-in-law Letha Broehm.

Funeral services will be held at Noon, Friday, October 31, 2014 at St. Matthew Evangelical Lutheran Church, 129 S. Mason Street, Appleton. Visitation Friday 10am-Noon prior to the service at the Church. Interment will take place at Appleton Highland Memorial Park in Appleton with military honors.

The family wishes to thank the nurses and staff of Applewood Assisted Living and Horizon Home Care and Hospice for their compassionate care.