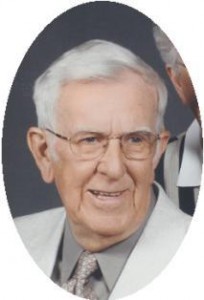 He was born June 18, 1921 in Grafton, Wisconsin to Arnold and Flora Hoffmann Hadler.  In 1942 he entered the Army and served in the Phillipines.  He was honorable discharged as a Staff Sargeant from the 3750th Quartermaster Truck Company in 1946.  After the war he began working at Harnischfeger.  He met Betty Jane Hauswirth of Port Washington and they married June 7, 1947 at Friedens Church in Port Washington.

Dick began working for Simplicity as a tool engineer retiring in 1986.  He was a charter member of the Ozaukee Memorial Post 5373 VFW, Belgium and was a long time president of the Port Washington Kiwanis.  Through the years he held many offices at Friedens Church including president and treasurer.  Dick was a jack of all trades and enjoyed woodworking, painting and art, his garden and golf.

He is survived by his wife Betty Jane of Belgium and daughters Wendy (Joe) Misuraco of Spring, Texas and Amy (Gary) Maechtle of Tobaccoville, North Carolina.  He was the proud grandpa of Cara, Micca, Bradley, Megan, Ryan, Leah and Christopher and great grandpa of Christian, Alexandra, Brandon, Dylan, TJ and Colin.  Further survived by brother Ernst “Ernie” Hadler of the Town of Saukville, sister Dorothy (Al) Thompson of Grafton, other relatives and friends.  A son, Warren A. and two brothers, Harold and Frank preceded him in death.