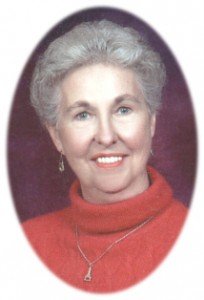 Sally F. Gilson, age 80, of Parknoll Lane, Port Washington, WI passed away peacefully with her family at her side in the early morning hours of August 26, 2015 at her home.

She was born on April 10, 1935 in Milwaukee, WI, daughter of George I. and Alice Ubbink Gilson. She grew up on Grand Avenue in Port Washington, graduating from Port Washington High School. She attended Mac Murray College in Illinois, later transferring to the University of Wisconsin-Madison.

She married and raised her two children on Patrick Court in Port Washington. Her life moved her to various cities, but in 1992, Sally returned to the hometown she loved, living on Benjamin Street.

Over the years, Sally had been active with her church-First Congregational Church. She participated in their choir and the ladies fellowship, amongst others. She will be remembered for her infectious laugh, vibrant nature that inspired many and her mint bars. She was always very active within the community. She had been a member of the Port Washington Women’s Club, Port Washington Historical Society, Port Washington Garden Club and the Red Hat Society. She worked for many years at the WJ Niederkorn Library. Sally enjoyed the outdoors, participating in biking or skiing, golfing with the Hawthorne Honies golf league or bird watching. She enjoyed being with others; playing Bridge or making soup with her church friends.