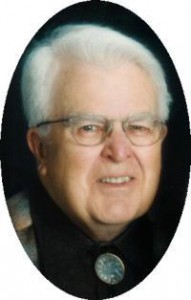 orbert G. Federspiel, 91, of East Walters Street, Port Washington died peacefully on Monday, April 5, 2010 at Heritage Nursing and Rehabilitation in Port Washington where he had been a resident the past few months.

During World War 2 he was an aviation electrician in the Navy.  He returned to Port Washington and Wisconsin Electric.  He was a machinist and machine operator at the Wisconsin Electric Power Plant in Port Washington over 40 years, retiring in 1982.  He was a member of the International Association of Operating Engineers Local 317 and always enjoyed the breakfasts with the gang in retirement.

He was a member of St. Mary�s Church in Port Washington for many years, also ushering there and more recently ushered at Immaculate Conception Church in Saukville.  He was a member of the Catholic Order of Foresters and Catholic Knights Insurance.  He will be remembered for his tinkering, working with electrical and mechanical things.  He was a good repairman with his home and cars.

He is preceded in death by his first wife Marie, an infant son Paul, his sister Margaret Federspiel and brother Joseph Federspiel.

A Mass of Christian Burial will be celebrated at NOON Sat. April 10 at Immaculate Conception Church, 145 Church St., Saukville.  Reverend Patrick Wendt will be the celebrant.  A visitation will take place from 9:30-NOON Sat. AT CHURCH with a 9:30AM Rosary.  Interment will be at St. Mary’s Cemetery in Port Washington.  Memorials are appreciated.