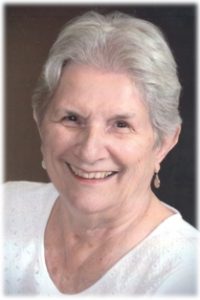 Loretta F. Federspiel, age 86, of the Harbor Village, Port Washington, WI was the beloved wife of Carl Federspiel, and mother of six happy, healthy children. Quite the jokester, she used to joke that Carl’s family never thought the marriage would last — so she made sure that it did!

She had a great, sassy sense of humor and joked with her kids to the very end. She’d been asking her deceased husband, Carl, (who passed away on February 21, 2019) to come to get her for months. It took him a while, but he finally acquiesced to her wishes on December 25, 2019.

Loretta will long be remembered as one who liked to laugh and work hard. While raising her brood, she worked part-time at the Ozaukee Press, and later, while working at Simplicity Manufacturing Co., she worked the quiz to win a free turkey through the Press at Thanksgiving. She would later retire from Charter Steel in Saukville.

Loretta enjoyed playing dominos and her book club. She was also active with the Port Washington Senior Center and their Chicks with Sticks knitting and crocheting group. Not much for taking walks, Loretta enjoyed baking apple pies with the other women in the neighborhood. They’d get together, collect apples from the trees in the yard, peel and slice them up and bake sheet pies to share. Loretta always made the crust.

Loretta was born on April 23, 1933 in Dacada, Wisconsin. She was the daughter of Edward and Lucille Penkwitz Feider. Upon the early death of her mother, Loretta moved to Port Washington to live with her Grandmother and Aunts. Loretta attended St. Mary’s Grade School and Port Washington High School. She married Carl on August 23, 1952 at St. Mary’s Church in Port Washington.

She and Carl lived in the Federspiel family homestead on Wisconsin Street until moving to Lakeview Avenue for a few years until his death in 2019.

She is preceded in death by her husband Carl, her son Richard, her sisters-in-law Rita and Margaret Federspiel and brothers-in-law George and his wife Angie, Wilfred (Brother Conrad CP), Joseph and Norbert and his wife Hiltrude Federspiel.

A Mass of Christian Burial will be celebrated at 6PM Thursday, January 2, 2020 at St. John XXIII Parish-St. Peter of Alcantara Church, 1802 N. Wisconsin Street, Port Washington, WI. Reverend Patrick Wendt will be the celebrant. Interment St. Mary’s Cemetery in Port Washington. Visitation will take place from 4-5:45PM Thursday prior to Mass AT CHURCH.