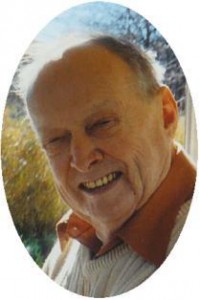 A dedicated family man, Bob was born February 26, 1926 to Herbert and Gertrude Biever Ewig in Port Washington.  After high school he entered the US Navy and served aboard the USS Iowa.  He achieved the rank of Seaman Second Class and served from September, 1945 until April 1946.  On May 20, 1950 he married Betty Jane Allen of Port Washington at St. Mary’s Church in Port Washington.

For 17 years after the war he worked for Harnishfeger Homes of Port Washington; later moving to Arkansas and Indiana with them.  In the mid-1960’s he and his family returned to Port Washington when he took a job as an accountant for Eddy Associates, Inc. of New Berlin.  He remained with them for 19 years becoming a Vice President, retiring in 1988.  That same year, after living on North Holden Street for 22 years, they decided to downsize to a smaller home.  Over the years he could be seen walking with his wife or active as the Thomas Jefferson Middle School Crossing Guard for 13 years.  With family and faith most important, he also enjoyed traveling and reading.

A heartfelt thank you to Sheboygan Progressive Care Center and St. Nicholas Hospice.

Funeral services will be held 7 PM Monday, August 4, 2008 at First Congregational Church, 131 N. Webster St., Port Washington.  The Reverend Don Niederfrank will be the officiant.  Interment will take place at the Union Cemetery, Port Washington.  Visitation will be 4-7 PM Monday AT CHURCH.