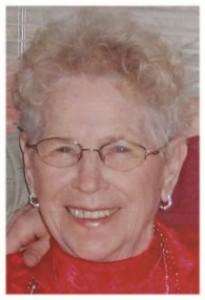 Charlotte Rosetta Esselman (nee Schultz), age 87 of East Van Buren Street, Port Washington died peacefully with her family at her side on Sunday, September 7, 2014 at her home.

Charlotte was born on July 26, 1927 in Saukville, WI, daughter of the late Herbert and Mamie Meyer Schultz. On June 19, 1948, she was united in marriage to Donald N. Esselman of Trenton, WI at Holy Trinity Church in Newburg, WI. They resided in the Town of Port Washington and started a family of eight children. In 1965, they moved to Port Washington, remaining on Van Buren Street for over 49 years.

In her early years, Charlotte worked at the shoe factory in Cedarburg. In 1971, Charlotte started working at Tecumseh Power Products in Grafton, WI. Shortly after her 62nd birthday in 1989, she retired from her production work duties to remain a full-time Mom and Grandma. The family attended church at St. Peter’s Church in Saukville. Upon moving to Port Washington they became members of Friedens Evangelical Church.

There were so many things that Charlotte enjoyed, but not as much as her family. Hobbies like gardening, weed pulling, collecting hummingbird keepsakes, camping and playing Bingo kept her busy. She most enjoyed waiting for the phone to ring in the hopes that someone was going to come and visit or to take her and Dad on an adventurous drive. Charlotte had been a member of the Landt-Thiel Woman’s Auxiliary American Legion Post 470 in Saukville for many years.