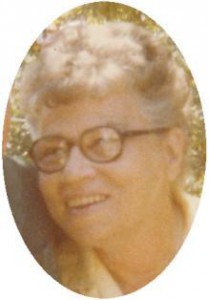 Kathleen Duffrin, 82, died Sunday, April 3, 2005 at Heritage Nursing and Rehabilitation Center in Port Washington where she had been a resident for several years.

She was born in Milwaukee, Wisconsin on June 21, 1922 to John and Celia Niederkorn Lauters.  On July 22, 1961 she married Leo J. Duffrin, III of Marinette, Wisconsin.  Throughout the years Kathy  held many jobs including at the Telephone company and AC Spark Plug Company.  Later she worked in the storeroom at Miller Brewing, on the line at Simplicity Manufacturing and then as an attendance counselor at Port Washington High School.  Her husband Leo preceded her in death October 12, 1978.