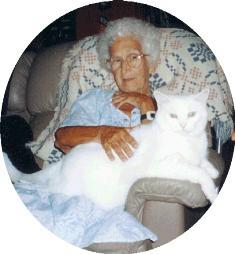 LaVerne Dayton, 80, of Belgium was taken by the angels November 7, 2003 while visiting her daughter in Florida.  She had battled stomach cancer for more than a year.

She was born in Random Lake to John Konrad and Angeline Hansen on December 9, 1922.  Growing up in Random Lake she later moved to Port Washington and began working at the Wisconsin Chair Company and Bolens.  She met Spencer R. Dayton of Melrose, Wisconsin and married him in Milwaukee on March 14, 1949.  Living on Pier Street in Port Washington, she stayed home to raise their six children.  Mr. Dayton preceded her in death on March 14, 1999, the couples 50th wedding anniversary.

LaVerne loved the outdoors and enjoyed tending her garden.  Whether planting flowers or shopping for new seed varieties.  In the winters she brought her garden indoors.  She collected angels, starting  when someone gave her an angel when Spencer’s health started to fail.  She collected all sorts and had about 100.  In 2000 she moved from her Pier Street home to Belgium to live with her daughter Connie.

She is survived by her children Ron (Sue) Dayton of Port Washington, Bonnie (Phil) Daytona of Algoma, Wisconsin, Connie Dayton of Belgium, Don Dayton of Milwaukee, Pattie (Jack) Goodfleich of Navarre, Florida and Russel (Donna) Dayton of Huntsville, ALabama.  She was the proud grandmother of Matt, Michael, Shaun, Jenny and Jessica and had two step grandchildren Adam and Jessica Lee Burnette.  Further survived by sisters Glenore (Al) Becker of Tampa, Florida and Florence Stark of Menomonee Falls, special friends Mary Michaelson of Milwaukee, James (Dorothy) Poull of Port Washington and Fred (Janet) Krier of Belgium, other relatives and friends.  Preceded in death by her husband, 2 brothers and 3 sisters.

Mrs. Dayton’s was cremated and memorial services will be held on Saturday, May 29, 2004 at 12:30 pm.  Pastor Mark Voll will officiate the services at the funeral home.  Interment Union Cemetery, Port Washington.  Visitation from 11:30 am to 12:30 pm Saturday at the funeral home.