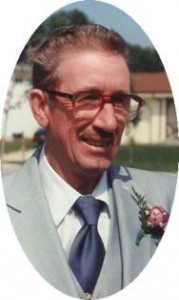 He was born May 12, 1928 in Waukesha, WI to William and Mamie Tuyls Carroll. Growing up in Waukesha he met Olive Payne and on September 24, 1949 married her in Waukesha. They later moved to Milwaukee and in 1963 moved to Port Washington.  He was the Coal Bridge Boom Operator, loading and unloading coal boats for Great Lakes Coal and Dock Company in Port Washington. When the boom was dismantled because the boats were self of unloading, he joined Wisconsin Electiric and drove a caterpillar on the coal pile. He was a member of the International association of Operating Engineers Local 317.

The family had a huge vegetable garden. He also enjoyed bowling at the former Bley’s and Harbor Hills, fishing inland lakes and the Port Harbor for perch and smelt with the kids and grandkids. He had been a resident of the Maple Crest Apartments this past year and liked to watch old television westerns like Bonanza and Gunsmoke.