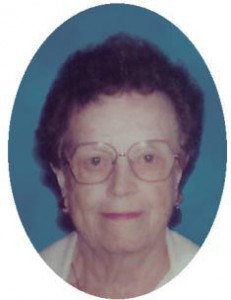 She was born in Port Washington on September 14, 1912 to J. Peter and Anna Wellenstein Reiter.  She worked as an office clerk for the Electric Company in Port Washington, and in the records room at the former St. Alphonsus Hospital.  Later she was executive secretary for Roy Schuknecht, who was the president of the former Port Washington Savings and Loan.  She married John P. Bertrang of Aurora, Illinois on August 19, 1943 at St. Mary’s Church in Port Washington.

Together they lived at 811 N Webster Street for many years.  Viola was a member of St. Mary’s Church in Port Washington and was an active volunteer with the former St. Alphonsus Hospital and the Ozaukee County Health Office. She was very proud of her home and liked to spend time in her garden.  Her husband John preceded her in death October 2, 1997.