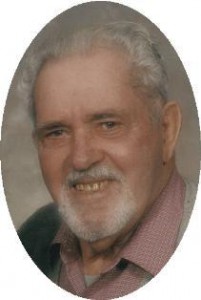 Bob was born August 9, 1921 near Barton, Wisconsin to Margaret and Al Bertram.  He was baptized at St. Mary’s Catholic Church in Barton and received First Holy Communion there.

He grew up in Barton, Milwaukee and other places as his father built highways and the family moved many times.  They settled on a farm near Grafton when Bob was 16 and later purchased a farm on 17th Avenue and Falls Road in Grafton.  Later Bob purchased that farm.

After farm work, Bob’s first job was the Cedarburg Egg Plant.  On May 18, 1944 he volunteered to enter the Navy and spent six weeks at Great Lakes Training Naval Station.  He married Betty Lauters of Port Washington on June 29, 1944 at St. Mary’s Catholic Church in Port Washington.  He was shipped out and became a Second Class Seaman and then First Class Fireman on the YTB129 USS Osceola Tug Boat, stationed in Hawaii.  He kept in touch daily with his new wife by letter until he returned in February 1946.

He began working at Hanzinger Construction and was a molder at Gilson Foundry.  Bob decided to buy his own silo equipment and began building silos and grain bins in Illinois, Iowa, Georgia, Texas, Mississippi, Louisianna and Minnesota.  In 1972 he took his family to Pueblo West, Colorado and worked as an excavator and finally at the Sutherland Lumber Company.  In 1990, Bob and Betty retired to Sunbird, Arizona and in 2000 they were back in Grafton.  Bob enjoyed hunting, some golf, card playing and a lot of sight seeing.  As he got older, his greatest joy was his children, grandchildren, many nieces, nephews and relatives.  He is preceded by his daughter Mary and a brother Al.

A Funeral Mass will be celebrated at NOON Sat. Nov. 19 at St. Joseph Church, 1619 Washington Street, Grafton.  The Reverend Steven Lampe will be the celebrant.  Interment will take place at St. Mary’s Cemetery, Port Washington.  Visitation will be from 9AM to Noon Sat. AT CHURCH.  Memorials appreciated.