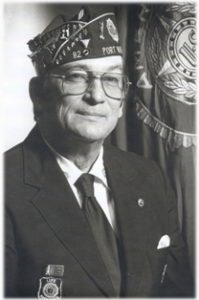 He was born on July 14, 1932 in Ashland, WI; son of Joseph and Evelyn Armstrong Berthiaume.

A graduate of Ashland High School, he received the athletic and academic award presented to his high school’s outgoing senior representative. He attended Northland College in Ashland, later moving to Milwaukee and finishing his electrical degree from Milwaukee Area Technical College (MATC). Just prior to that, Aber entered the U.S. Navy, serving as a Sonarman 2nd Class from 1951 until his discharge in 1955.

On October 11, 1958, he married Roberta L. Riley, also of Ashland, at the former St. Agnes Catholic Church in Ashland. They will celebrate 60 years together.

In 1962, they would move to Port Washington. Richard was a Diagnostic Technician for High Voltage Maintenance Corporation of Milwaukee for many years, retiring in 1997. Over the years he enjoyed hunting and fishing with family and friends. Richard was a life member and past commander with the Van Ells-Schanen American Legion Post 82 of Port Washington. He was instrumental in commissioning the painting of the American Flag on the band shell.

He is preceded in death by his parents and his sister Virginia Talaska.