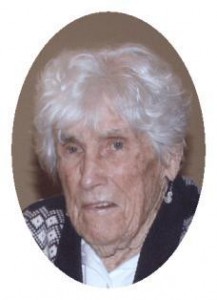 She was born on October 6, 1922 in Belgium, Wisconsin, daughter of Nicholas and Amelia Antoine Mueller.  A life long resident of the area she was always sports minded and played basketball in her youth.  She met a young basketball referee named Harold J. Bathke.  They married on October 23, 1940 at St. Mary’s Church in Lake Church, town of Belgium and raised their family on West Norport Drive in Port Washington.  Her husband Harold preceded her in death September 14, 1994 and in 2006 she moved to Lincoln Village in Port Washington.

Eunice was quite a social person, chatting with the neighbors.  She enjoyed bowling and golfing, even into last season, and golfed with the Hawthorne Hills Honies.  A loving grandma to all, she was quite fond of her canine pal Misty.

Mass of Christian Burial will be celebrated at 6:30 pm Thursday, February 2, at St. Peter of Alcantara Catholic church, 1802 N. Wisconsin Street, Port Washington.  Reverend Patrick Wendt will be the celebrant.  Visitation will take place from 4-6:30 pm Thursday AT CHURCH with a 4 pm rosary.  Interment at St. Mary’s Cemetery, Port Washington.  Memorials to the American Cancer Society, St. Peter’s Church or the charity of choice appreciated.