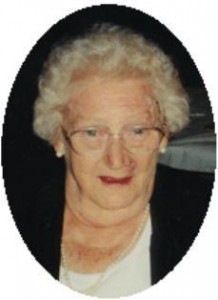 She was born December 5, 1928 in Danbury, Wisconsin to George and Noma Hoyt Love.  She met Douglas Anderson of Dallas, Wisconsin and they were married March 12, 1949 in Superior, Wisconsin.  In 1969 they moved their family to the Fredonia area and in 1974 they moved to Saukville.  She worked at EST manufacturing in Grafton for 15 years.  Her husband Douglas preceded her in death September 14, 1987.  Phoebe was a loving and devoted wife and mother and will be remembered by family and friends as a loving caregiver to many.