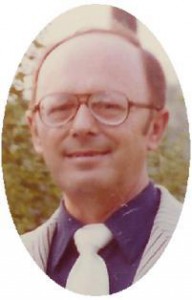 He was born December 6, 1924 in Port Washington to Frank E. and Ilma B. Hiller Altendorf.  After graduating from Port Washington High School he studied  engineering at Ripon College.  In 1943 he joined the Army and served as a rifleman in World War Two.  After the war he met Elizabeth “Betty” Greenwood of Marshfield, Wisconsin.  They married at the First Methodist Church in Marshfield on August 20, 1949.  Dick was an independent insurance salesmen for 34 years working for Roberts and Ryan Agency, A.N. Ansay & Associates and running his own business, Altendorf Agency, on W. Grand Avenue.  He was a former member of the Port Washington Kiwanis and Friedens Church in Port Washington.