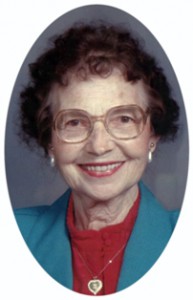 She was born July 17, 1924 to Edwin and Catherine Thomas Mueller on the family farm in the Town Of Holland (Cedar Grove), Wisconsin. After finishing school, she worked in Chicago as a maid for a short time and after returning home, worked at Allen Edmonds Shoe Factory in Lake Church. She married Michael “Mike” Tackes of Montana on June 25, 1949 at St. Nicholas Catholic Church in Dacada.

Vernette was a member of St. Mary’s Catholic Church in Port Washington and for many years made the coleslaw for all of the Port Catholic Fish Fry’s. She liked to square dance and with her husband, belonged to the Country Promenaders Square Dance Club. Through the years they traveled the world and spent time with family and friends. Her husband Mike preceded her in death July 13, 2004.

Perhaps she will be most remembered as a prolific gardener. For most of her life, she tended a large garden that always produced more vegetables than she could use. She would preserve as much as she could, but was generous in sharing her bounty with many throughout the community. She liked to sew and was an excellent cook and baker and did some special cake decorating for those who asked. She was a kind and giving woman who shared a smile easily.

She is survived by her children Arlene (the late Gary) Flerchinger of Chattanooga, TN, Gary (Meg) Tackes of Port Washington and Bev (Tom) Seidl of Muskego. Further survived by 7 grandchildren, 6 great-grandchildren, nieces, nephews, other relatives and friends. She is preceded in death by her husband, parents, 4 sisters and 2 brothers.

The Rev. Thomas Lijewski will celebrate her Mass of Christian Burial 11 am Tuesday, July 14, 2015 at St. Mary’s Catholic Church, 430 N. Johnson Street, Port Washington. Interment in parish Cemetery. Visitation will be held 5-7 pm Monday at the Poole Funeral Home with a rosary at 7 pm and from 10:30-11 am Tuesday at St. Mary’s Church prior to Mass. Memorials to St. Mary’s Church or charity of donor’s choice appreciated.