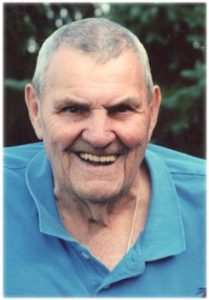 He was born March 30, 1932 in Hillsboro, ND to Helmer and Emily Larson. He graduated from Bohnsack high school in ND and was active in sports. He married Shirley Brag on May 4, 1951 in Ada, MN and started a family. The family lived in North Dakota, Minnesota and Montana before moving to Wisconsin in 1969. Upon moving to Wisconsin, Vic started working for Louis C. Hoffman & Sons as a heavy equipment operator, the job he held until he retired at the age of 72. Shirley preceded him in death November 15, 1984.

He met Cheryl “Sherri” Bunney and the two married April 11, 1986 and resided in Saukville. The two of them enjoyed socializing at the Saukville Truck Stop and other local restaurants, going to movies and spending time with friends and family. She preceded him in death March 9, 2013.

Vic continued to be a social man and it seemed that he knew just about everyone. He didn’t venture far without his loyal canine companion, Harley. He liked to dance and swim when he was younger and was an advanced ham radio operator. He was also very skilled at billiards, playing at the Port Washington Senior Center up until last year.

He is survived by his children Roger (Linda) Larson of Grafton, Karen (Steve) Buss of Sun Prairie, WI, Cindy (Tony) Blazek of Lodi, WI and Misti (Pat) Depies of Random Lake. Further survived by 13 grandchildren, 15 great-grandchildren and many other relatives and friends.

He is preceded in death by his wife Shirley and his wife Sherri, sons Virgil and David Larson, 4 brothers and 5 sisters.

The family would like to give a special thanks to the “Tuesday night ladies” from Open Door Bible Church and the many other close friends and neighbors who played a significant role in Vic’s life, particularly after his wife Sherri went to be with the Lord.