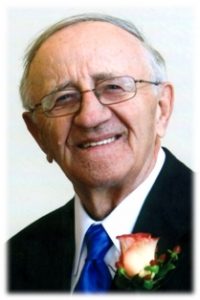 He was born on June 14, 1936, “Flag Day”, in the Town of Holland in Sheboygan County to William E. and Rose Kraus Knepprath, Sr. Near Dacada, he grew up on the family farm. On October 10, 1959, Bill married Loretta Strohmeyer of Kewaskum at St. Bridgette’s Catholic Church in Kewaskum.

He and his wife raised their family in the town of Saukville for many years. Bill worked for Ataco Steel Manufacturing Company of Grafton for over 40 years. He retired in 1998. Over those years, Bill was a member of the International Association of Machinists and Aerospace workers Local 1430. He had been a member of Immaculate Conception Parish and St. John XXIII Parish.

Bill enjoyed camping and cutting wood, playing cards and tinkering around the house. He will be remembered for his love of music, especially polkas. He took pride in his beloved Minnesota Vikings. Bill loved to chat with his friends and family.

Mass of Christian Burial will be celebrated at 6PM Tuesday, April 9, 2019 at St. John XXIII Parish-Immaculate Conception Church, 145 W. Church Street, Saukville, WI. Reverend Patrick Wendt will be the celebrant. Visitation will take place from 4-5:45PM Tuesday AT CHURCH prior to Mass. Interment will be at St. Mary’s Cemetery in Saukville.