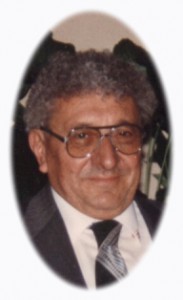 He was born June 9, 1926 to John and Julia Thill Kartheiser in Lake Church, Wisconsin. He grew up in Lake Church and graduated from Port Washington High School. He started working in construction and then as an electrician. He married Virginia “Ginny” Millen of Milwaukee on November 8, 1947 at Sacred Heart Catholic Church in Milwaukee. In the early 1950’s he built his house in Port Washington.

In the early 1960’s he worked in Pennsylvania for a few years and then returned to Port Washington. Over the years he held various positions at Cleaver Brooks in Milwaukee, Scot Pump in Cedarburg and Trak Industries in Port Washington. After retiring he managed the SuperWash Car Wash in Port Washington. Ollie worked continually throughout his life. After a fall where he broke his hip and was healing, his doctor said “I never thought I’d tell an 86 year old man to go back to work.”

Ollie and Ginny liked spending time at their cottage on Spring Lake near Wautoma and joined a snowmobile club. They also owned and showed their collector cars, mainly Oldsmobiles throughout the area. They enjoyed taking trips and over the years had been to almost every casino in Wisconsin, Michigan, Illinois, Iowa and Mississippi. Ginny preceded Ollie in death March 18, 2007.

Ollie will be remembered as a Class A Handy Man, building and repairing just about anything. He was also an avid hunter and boater in his younger days. These last years, his best friend was the neighbor’s pit bull, Dulcie. They shared KFC every day together.

He is survived by his son James (Nancy) Kartheiser of Germantown and brother John (Audrey) Kartheiser of The Villages, FL. Further survived by brother-in-law George (Janet) Millen of Tillatoba, MSi; sisters-in-law Julie (the late Eugene) Schoessow of New Berlin and Alice Green of Goldsboro, NC, nieces, nephews, other relatives and friends. He is preceded in death by his wife Ginny and son Oliver, Jr.