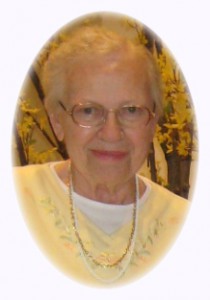 She was born in Holy Cross, Town of Belgium, Wisconsin on July 22, 1933 to Jacob and Margaret (nee Lesch) Watry. She married Ervin Karrels of Chicago, Illinois on October 1, 1955 at St. Nicholas Catholic Church in Dacada. She was a member of St. Mary’s Catholic Church in Port Washington and was active in the Christian Mothers in her earlier years. When her children were younger she was a volunteer at St. Mary’s Catholic School and Child Care. When her children grew up, she continued working at the school.

Elaine was a wonderful wife, mother, grandmother and great grandmother. She devoted her life to her family and treasured spending time with them. A bit of a “card shark”, she liked a good game of sheepshead, doing puzzles with her grandchildren, quilting, baking, family travels, camping, and following the Chicago Cubs and the Green Bay Packers.

The Reverend Thomas Lijewski will celebrate a Mass of Christian Burial at 6:30 p.m. on Tuesday, April 28, 2015 at St. Mary’s Catholic Church, 430 N. Johnson Street, Port Washington. Interment at the Parish Cemetery. Visitation from 3:30 to 6:30 p.m. Tuesday AT THE CHURCH with a Rosary at 3:30 p.m. Memorials may be made to St. Mary’s Catholic Church, the Alzheimer’s Association or to the family for sharing with special local charities.

The family would like to thank the staff at Lasata Care Center and Heartland Hospice for the tender loving care they provided for Elaine.