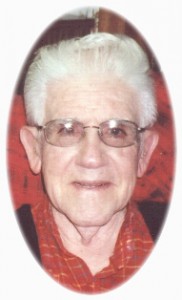 Carl J. Dana, age 98, of West Foster Street, Port Washington died peacefully Thursday, October 23, 2014 at Anita’s Gardens of Plymouth where he has lived the past few months.He was born on May 9, 1916 in the town of Holland; son of Alvin L. and Della Schrues Dana.  He grew up on the family farm.  As a young man, he worked at the Port Washington Chair Factory.  Carl served during World War 2 in the Army Air Corp from 1942 to 1945.

Carl was a family man who enjoyed his home.  He tinkered around the house; tending to the yard, his garden and his birds.  He had a long musical history.  He loved to sing and played harmonica and accordion by ear.  During many family gatherings, Carl shared his yodeling and the famous turkey call, especially at Thanksgiving.  In his youth, he and his sister Delia performed locally.  He will also be remembered as a proud man of faith.

His funeral mass will be celebrated at 6PM Tuesday, October 28, 2014 at St. Mary Catholic Church, 430 N. Johnson Street, Port Washington.  Reverend Thomas Lijewski will be the celebrant.  Visitation will take place from 4-6PM Tuesday AT CHURCH with a 4PM Rosary.  Entombment will take place at St. Mary’s Catholic Cemetery in Port Washington.  Memorials to the parish are appreciated.